How to Be a True Alpha

I hope you will appreciate the following excerpt from The Wisdom of Wolves by Jim and Jamie Dutcher as much as I do. 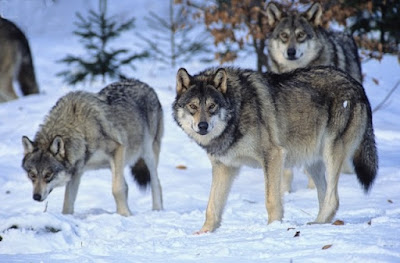 "The wolves of the Sawtooth Pack … had spent the last three days working through the carcass of a 600-pound bull elk and were enjoying the resulting food stupor, resting at the edge of the forest on a crisp October afternoon. During our years at wolf camp, we did our best to re-create the way wolves live in the wild, mimicking the success or failure of a hunt, bringing in road-killed elk and deer at irregular intervals. After such a big meal, they wouldn't need to eat again for several days.

"It was a picture of pure contentment. Motomo and Amani basked in a patch of sunshine. Snarling and growling in mock battle, Wahots and Wyakin played tug-of-war with a leftover piece of elk hide. Matsi and Lakota snoozed side by side. Chemukh, always the loner, gnawed on the end of an antler a few yards away. Kamots sat and calmly watched his pack.

"Suddenly he lifted his head to full attention and his body became tense. The forest was quiet save for the occasional croaking of ravens, but his ears pivoted forward and he turned to point his nose toward something distant and unseen. With sudden purpose he rose to his feet and trotted away with that cool, determined gait that wolves have. Motomo and Amani lifted their heads to watch him go, and then settled back down. They knew Kamots. Whatever it was, he had it covered.

"Fifteen minutes later he reappeared at the same confi­dent trot, rejoined the others, and lay back down. It must have been a false alarm, possibly an elk moving through the nearby forest or the distant falling of a long-dead tree. His body language told all that there was no cause for concern. Whatever was going on, he dealt with it. That's just who he was.

"For the better part of nine years Kamots was the undis­puted leader of the Sawtooth Pack. Under his protection, the pack thrived. From a filmmaker's perspective, he was beautiful to behold. His looks were classic-gray with a charcoal saddle, a dark face mask above a light muzzle. He wasn't the biggest wolf in the pack, but the way he stood often made him appear so. He held his head and tail high and kept his ears up and alert. When he moved, it was with an unhurried confidence and certainty. His eyes were his most expressive feature. They were light amber, almost yellow, and in an instant they could flash from serious to mischievous, to concerned, to disarm­ingly sweet. The joys and the burdens of his role seemed to play across his face constantly, making him one of the most engaging wolves to film, photograph, or just watch. In looks, in bearing, and in behavior he was the embod­iment of an alpha wolf.

"We've noticed lately that the word 'alpha' is falling out of favor among some biologists. They would rather use the dry observational term 'breeding adult.' Unfortu­nately, the word 'alpha' has also come to be used to describe aggressive, hypercompetitive human males, which further conveys the wrong impression. Yes, alphas are the breeding male and female -- but they are so much more than the dominant individuals of the pack. After spending years in Kamots's company, we have concluded that being an alpha has almost nothing to do with aggres­sion and everything to do with responsibility. Alphas are driven from within to shoulder the well-being of the entire pack. They patrol the boundaries of their territory, looking for danger. They are keepers of pack knowledge where to find prey and how best to hunt it. Alphas are assured, alert, and compassionate. A true alpha is a leader in the very best sense."

Truth is...leading with assurance, alertness, and compassion has self-interest and aggression beat all to pieces.