According to The Selling of the Babe, by Glen Stout, the Sultan of Swat, Babe Ruth, did more than hit his way to a long-standing home run record:

It wasn't just the home run that Ruth was popularizing. He was also taking the stigma out of the strikeout. Even before the pitching distance settled in at 60 feet, 6 inches and pitchers started throwing overhand, the strikeout had been considered the ultimate embarrassment, the batting equivalent of tripping over a base or throwing the ball over the backstop; something to be avoided at almost any cost. Guys like Joe Jackson, Ty Cobb, and others took pride in keeping their strikeouts down to only 20 or 30 a season. It was considered better to ground out, pop out, or fall prostrate over the plate and fake a heart attack than strike out.

Not anymore. Fans found Ruth's strikeouts exciting -- and he didn't much care if he struck out, either. Ruth figured it was all part of the process, one that might result in a home run the next time. Every swing and miss resulted in a correction in the following at bat.

No one paid closer attention to that than Ruth's Yankee teammates. He was conducting a clinic in a new way of hitting every time he picked up the bat. Not worrying about strikeouts gave them license to swing and swing hard. And they did. As a team, even without Ruth's contribution, their strikeouts would skyrocket in 1920, but so would their power and number of long hits. The same would hold true for almost every other team. 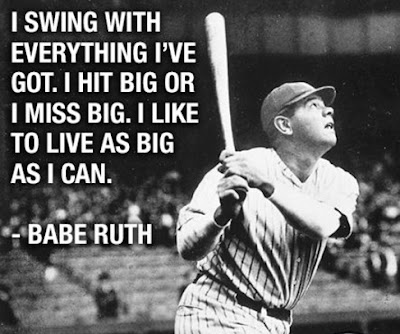 Truth is...sometimes, you learn what works by learning what doesn't. Besides, you miss 100% of the swings you don't take. So keep swinging!

Son of My Purpose-Driven Journal


Rick Warren and me, on worship:

"When we worship, our goal [should be] to bring pleasure to God, not ourselves. Worship isn't for you. It's for God."  -  We must come to God to compliment Him - not in order to feel better about ourselves. Now, when I praise unreservedly, it always results in me feeling better, too; but that's a by-product, not the goal. 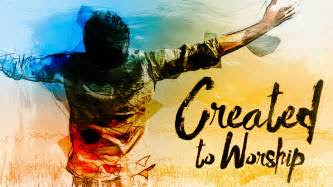 "Like a proud parent, God especially enjoys watching you use the talents and abilities He has given you."  -  This is especially encouraging to me. At times I feel like I am showing off or that I might be trying to get attention for myself (really, it's more like I'm afraid that others will think I'm doing that) - and the real deal is not "Look at me!" but rather, "Look at what God has enabled within me!" Like Eric Liddell saying, "When I run, I feel God's pleasure."

"When we completely surrender ourselves to Jesus, we discover that he is not a tyrant but a Savior; not a boss, but a brother; not a dictator, but a friend."  -  Slavery to Christ is freedom from sin's stranglehold.

"You know you're surrendered to God when you rely on God to work things out instead of trying to manipulate others, force your agenda, and control the situation. You let go and let God work. You don't have to always 'be in charge.' Instead of trying harder, you trust more."

"Nothing is more powerful than a surrendered life in the hands of God."  -  Is it possible that my life is having more impact as an elder than it could have as a youth minister? And every change of direction along the way has been an attempt to follow Christ. So, it's all good.

"Intimate friendship with God is a choice, not an accident."

Truth is...To a certain extent, me "getting to know" God is like an ant getting to know the Internet. There is no real comprehension at all. Yet, there is real appreciation, gratitude, awe, love, wonder, respect, joy...

A Day in the Life


The 50th anniversary of the release of The Beatles' Sgt. Pepper's Lonely Hearts Club Band has been making a few waves in pop culture recently. Detractors will want to say it's just a Baby Boomers thing...a desperate grasp for relevance in a culture increasingly dominated by Millennials and beyond.

Maybe so, but I've got video evidence that it's a little more than that.

Thanks to editor Tom Compagnoni and the Australian arm of Huffington Post, the following 50 Covers... video suggests it's not just old codgers that appreciate creative composing and performing...and music can bridge a lot of gaps that many would say are insurmountable. 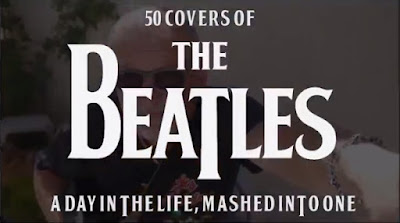 Truth is...there's not necessarily anything to be excited about in the lyrical content of A Day in the Life, but this video is a testimony that the world is not as divided and hateful and "us vs. them" as a browsing of headlines would suggest. People of all ages, nationalities, genders, economic standings, and political opinions are more alike than they are different. And if a fifty-year-old song can help point that out, then crank up the turntable, because I'd love to turrrrrrn youuuuuuuu oooooooon.

Bride of My Purpose-Driven Journal

"The closer you live to God, the smaller everything else appears."  -  ♪♫ And the things of Earth will grow strangely dim in the light of His glory and grace. ♫

"Death is not your termination, but your transition into eternity."

"...eternity with God...like trying to describe the Internet to an ant." 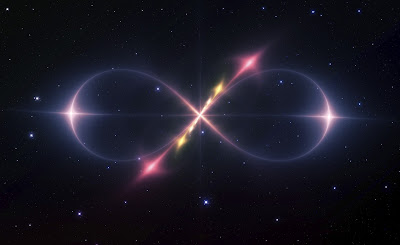 "Our culture says, 'If you don't own it, you won't take care of it.' But Christians live by a higher standard: 'Because God owns it, I must take the best care of it that I can'."  -  I wonder sometimes if I am using all my abilities and talents in a "stewardly" manner. Am I sitting on some of my talents because of false humility? Lack of assertiveness? Fear of rejection? Love of security?

"2 Corinthians 4:18 - 'We fix our eyes not on what is seen, but on what is unseen. For what is seen is temporary, but what is unseen is eternal.' When life gets tough, when you're overwhelmed with doubt, when you see evil prospering, or when you wonder if living for Christ is worth the effort, remember that you are not home yet. At death you won't leave home - you'll go home."  -  I remember walking down the dirt "sidewalks" of David, Panama and trying to imagine what it would be like to actually live there...not just be visiting for two weeks. I figured almost anything was bearable for two weeks. Maybe I could get that feeling about life on this side of the grave  -  undesirable conditions are nothing to fret about, because it's only temporary. Almost anything is bearable when you know it's not permanent.

Truth is...It IS all about God. Why were we created? So God's glory would be multiplied. (Isaiah 43:7: "They are my own people, and I created them to bring me glory.") Why did God free the Israelites from Egypt? So the honor of His Name would be spread throughout the nations. Why did Jesus die? So the volume of heavenly praise would be deafening.