Something about standing on the lip of that great expanse called "Tomorrow" makes a person want to take stock of his or her life and see where they've been, look at what direction they're heading, and dream of what could be. 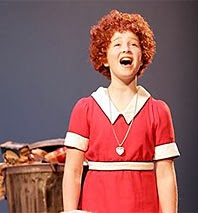 
Truth is...none of us has a guaranteed number of beans. May each one we are granted be spent in a way that is true, noble, right, pure, lovely, admirable, excellent, and praiseworthy. (Philippians 4:8)

A Visit From Emmanuel


'Twas the night before Jesus, and all through the town,
a couple was searching for a place to lie down.
“No Vacancy” signs were hung within view,
and soon there would be three searchers, not two.
For a child was nestled inside of the lass;
the time of his birth would soon come to pass.
One kindly innkeeper spoke up that day
to offer his stable, with newly-strewn hay.

Outside of town, where flocks of sheep huddled,
all thoughts of deep sleep were suddenly scuttled.
Away to the hillsides the shepherds all flew;
why were the lambs all in such a stew?
They bleated and baaed and ran around so,
that it felt like mid-day to shepherds below.
When, what to their wondering eyes should appear
but an angel of God, who said, “Do not fear.
I bring you good news of great joy, so be glad.
This is the best news that you’ve ever had!
Choose you this day to wipe off your frown.
Messiah is born in Bethlehem-town!”
More rapid than eagles, a choir then came;
a huge group of angels all praising God’s name:
"Now there is good will to all earthly men!
Glory to God in the highest! Amen!”
At the top of their lungs the choir sang out:
“Now praise Him! Now praise Him without a doubt!
And here’s how you’ll know what we’re saying is true:
a babe in a manger; a sign unto you.”
So off to the village the shepherds then ran,
to prove all the words from the heavenly band.

And then, in a twinkling, they heard in a stable,
the cry of a baby, both healthy and able.
The shepherds drew close to the source of the sound
and realized the newborn Messiah was found!
He was wrapped in a cloth, from his head to his toe.
His mother was so proud, she practically glowed.
Surrounded by hay as he lay on his back,
he looked like a hungry young lamb’s midnight snack.
His eyes—how they twinkled! His dimples—how merry!
His cheeks were like olives; his nose like a berry!
His dear little mouth was drawn up like a bow,
then he quieted down and to sleep he did go. 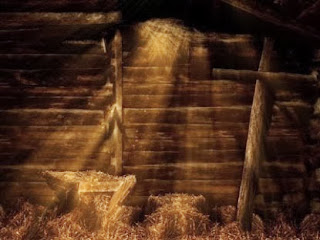 Thirty years later, on a hill far away,
surrounded by mockers instead of fresh hay,
This innocent baby, now an innocent man,
completed God’s purpose since time first began.
Nails in a tree held his hands and his feet,
and thorns encircled his head like a wreath.
He had a bruised face; they bloodied God’s Son.
He shook when he cried out, “It’s finished! It’s done!”

On the third day since they sealed off his tomb,
his men were hiding out in a locked room
When Jesus showed up and offered them peace:
“You’re no longer sin’s slaves; I’ve arranged your release!”
He was breathing and talking, although he had died!
The disciples could hardly believe what they’d spied.
A wink of his eye and a twist of his head soon gave them to know they had nothing to dread.
He spoke many words, and sent them to work,
“Go into the world, but don’t be a jerk.
Teach all the Good News through poem and prose,”
and giving a nod, to the sky he then rose!

The disciples all stared up into the sky;
some wanted to yell; some wanted to cry.
Two angels exclaimed, as Christ flew out of sight,
“Fear not! He’ll return like a thief in the night!”


COFFEE WITH JESUS is a comic produced by the creative force known as Radio Free Babylon. (Fair warning: some of the content of RFB has PG-13 language...which kind of confuses me, but that's not the point of today's post, so let's drop the subject.) The strip features a rotating cast of people (and Satan) who have short conversations with a suit-wearing Jesus, while sipping from cups or mugs full of coffee.

It's always tricky trying to represent what Jesus might say or do in contemporary situations, and CWJ's Jesus is probably a bit more snarky and sarcastic than the Lord would actually be, but hey, it's a comic strip.

A recent strip is a good reminder of how God views us as His children...and the first half gives some great imagery that should help get rid of some needless feelings of guilt many of us probably share. 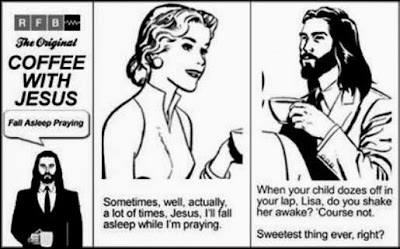 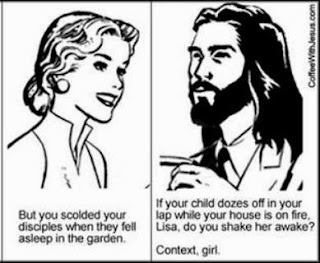 Truth is...Yahweh understands that "the spirit is willing, but the flesh is weak."


Pastor/writer Max Lucado is nothing if not prolific, but his real talent is not in his abundance of words, but in how he can express the most profound truth in the most succinct turn of a phrase.

I don't remember where I saw the following quote posted, nor do I know what larger work it is mined from, but it speaks perfectly to one of the most important themes you'll ever catch me touching on. 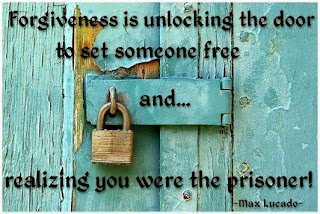 Truth is...one of the healthiest things we can do for ourselves is to extend forgiveness to someone else.

Bad For You = Good For Me


Sherman's Lagoon is Jim Toomey's comic strip, set somewhere in the tropics and populated by sea creatures who have troubles, triumphs, temptations, and quirks amazingly like us land creatures...which is how it comes to be that even a comic strip enjoyed by children can have Truth for us to ponder.

Case in point, the following scene featuring Hawthorne, the hermit crab, Fillmore, the sea turtle, and the star of the strip, the great white shark, Sherman.

And now, our "hero" enters.

Truth is...Hawthorne serves as an example (a bad one), and points us to the words of Paul in First Corinthians 13:6, "[Love] does not rejoice at injustice and unrighteousness, but rejoices when right and truth prevail." That's the way The Amplified Bible says it, but maybe you can relate to how Eugene Peterson renders it in The Message: "Love doesn't revel when others grovel."