The "Joys" of Remodeling


A common misconception about Christianity is that if a person will "ask Jesus into his heart," the person's life will become oh so much nicer and easier.

I repeat...that is a misconception.

Not surprisingly, C. S. Lewis wrote an excellent analogy that helps to explain the process and why it's not oh so nice and easy. From Mere Christianity: 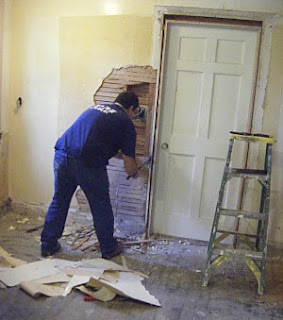 Imagine yourself as a living house. God comes in to rebuild that house. At first, perhaps, you can understand what He is doing. He is getting the drains right and stopping the leaks in the roof and so on; you knew that those jobs needed doing and so you are not surprised. But presently He starts knocking the house about in a way that hurts abominably and does not seem to make any sense. What on earth is He up to? The explanation is that He is building quite a different house from the one you thought of ― throwing out a new wing here, putting on an extra floor there, running up towers, making courtyards. You thought you were being made into decent little cottage: but He is building a palace. He intends to come and live in it Himself.


Truth is...Whether we're talking nutrition, cardiovascular health, vocations, or spirituality, for any change to result in a long-term benefit, it generally will require some short-term discomfort...to put it mildly.


With the - literally - explosive week that has just gone by in West, Texas and Boston, Massachusetts, any number of people are reacting in any number of ways...some constructive and helpful, others maybe not.

While the following video, shared on Facebook by who-knows-at-this-point, certainly falls in the "maybe not" category...it offers no solutions, and is just a longing for things to be different than the way they are...it still strikes a chord within me.

With apologies to, and sympathy for, those unfamiliar with The Andy Griffith Show, here are the Bellamy Brothers:


Truth is...even when the show first aired (1960-1968), it was an expression of longing for a type of society that was rapidly dying. Little wonder the show and the song cause a case of nostalgia. Still...we all could use a lot more Mayberry and a lot less Jersey Shore.


The stereotypical representation of what went on in Europe during World War II paints the picture of the noble, righteous Allies standing up for Truth, Justice, and Decency in the face of the consistently evil Nazis.

The following excerpt from W. G. Sebald's book, On the Natural History of Destruction, tells a mostly-hidden tale of quite a different reality.

In the summer of 1943, during a long heatwave, the RAF, supported by the US Eighth Army Air Force, flew a series of raids on Hamburg. The aim of Operation Gomorrah, as it was called, was to destroy the city and reduce it as completely as possible to ashes. In a raid early in the morning of 27 July, beginning at 1 a.m., 10,000 tons of high explosive and incendiary bombs were dropped on the densely populated residential area east of the Elbe. ... A now-familiar sequence of events occurred: first all the doors and windows were torn from their frames and smashed by high-explosive bombs weighing 4,000 pounds, then the attic floors of the buildings were ignited by lightweight incendiary mixtures, and at the same time fire-bombs weighing up to 15 kilograms fell into the lower storeys. Within a few minutes, huge fires were burning all over the target area, which covered some 20 square kilometres, and they merged so rapidly that only a quarter of an hour after the first bombs had dropped the whole airspace was a sea of flames as far as the eye could see. Another five minutes later, at 1.20 a.m., a firestorm of an intensity that no one would ever before have thought possible arose. The fire, now rising 2,000 metres into the sky, snatched oxygen to itself so violently that the air currents reached hurricane force, resonating like mighty organs with all their stops pulled out at once. 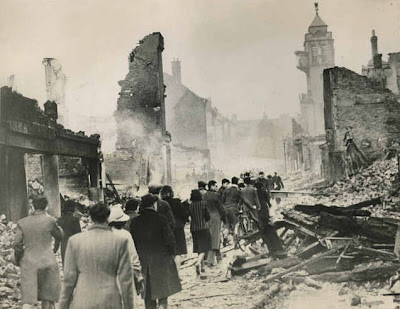 Residential districts with a street length of 200 kilometres in all were utterly destroyed. Horribly disfigured corpses lay everywhere. Bluish little phosphorus flames still flickered around many of them; others had been roasted brown or purple and reduced to a third of their normal size. They lay doubled up in pools of their own melted fat, which had sometimes already congealed. In the next few days, the central death zone was declared a no-go area. When punishment labour gangs and camp inmates could begin clearing it in August, after the rubble had cooled down, they found people still sitting at tables or up against walls where they had been overcome by monoxide gas. Elsewhere, clumps of flesh and bone or whole heaps of bodies had cooked in the water gushing from bursting boilers. Other victims had been so badly charred and reduced to ashes by the heat, which had risen to 1,000 degrees or more, that the remains of families consisting of several people could be carried away in a single laundry basket.

The exodus of survivors from Hamburg had begun on the night of the air raid itself. … The refugees, numbering one and a quarter million, dispersed all over the Reich as far as its outer borders. Under his diary entry for 20 August 1943, ... Friedrich Reck describes a group of forty to fifty such refugees trying to force their way into a train at a station in Upper Bavaria. As they do so, a cardboard suitcase 'falls on the platform, bursts open and spills its contents. Toys, a manicure case, singed underwear. And last of all, the roasted corpse of a child, shrunk like a mummy, which its half-deranged mother has been carrying about with her, the relic of a past that was still intact a few days ago.'

Truth is...no matter the conflict, "the enemy" never has a corner on the market for being evil.


In a previous post, I touched on the account of Jesus' conversation with the Samaritan woman at the well, found in John 4:1-42. Today, let's consider the results of that conversation...how it affected the whole town.

The woman had run into town, telling people to come and listen to Jesus: "Come, see a man who told me everything I ever did. Could this be the Messiah?" 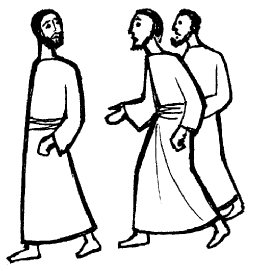 Now, look at the last three verses in the passage: So when the Samaritans came to him, they urged him to stay with them, and he stayed two days. And because of his words, many more became believers. They said to the woman, "We no longer believe just because of what you said; now we have heard for ourselves, and we know that this man really is the Savior of the world."

Here should be my goal, then, whenever I talk about Jesus: not that anyone would simply believe me, but that they would experience him.

Truth is...if a person's faith depends on the cleverness of my speech or the strength of my logic, then we are all in deep weeds. It's all about Jesus, not my skill at presenting Jesus.

How Deep The Father's Love For Us


Had a great Good Friday service at my church, the most moving piece of which (for me) was singing what sounds like an old Celtic hymn, but is, in reality, a relatively recent song (1995) by Stuart Townend, How Deep The Father's Love For Us. May these words, with additional lyrics by Dave Burkum, feed your spirit as they fed mine. 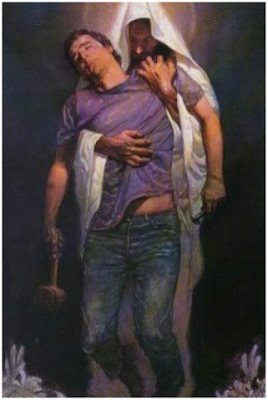 How deep the Father's love for us; how vast beyond all measure
That He should give His only Son to make a wretch His treasure
How great the pain of searing loss; the Father's love in Christ displayed
As wounds which mar the Chosen One bring many sons to glory

Behold the Man upon a cross, my sin upon His shoulders
Ashamed, I hear my mocking voice call out among the scoffers
It was my sin that held Him there until it was accomplished
His dying breath has brought me life; I know that it is finished

Too often I've forsaken Him; too many times to measure
But He has not forsaken me; His love endures forever
When I to Him my sins confess; my just and faithful Savior
Will cleanse me from unrighteousness; forgives my sin and failure

My God, my God, I lift my voice believing You will hear me
Though I have sinned and turned away, by grace, You still draw near me
No heights, no depths, no powers, no sword could ever separate me
From love that is in Christ my Lord; redeeming love that saves me

And I will yet declare Your praise among the congregation
Your saving grace will be the song of every generation
You bore the cross and scorned its shame; You fought the fight and won it
The Crucified has conquered death, "Our faithful God has done it!"

I will not boast in anything; no gifts, no power, no wisdom
But I will boast in Jesus Christ; His death and resurrection
Why should I gain from His reward? I cannot give an answer
But this I know with all my heart: His wounds have paid my ransom

For those who are in Christ the Lord, there is no condemnation
Our God is faithful to His Word; we'll never be forsaken

Our God is faithful to His Word; we'll never be forsaken

Truth is...I am convinced that neither death nor life, neither angels nor demons, neither the present nor the future, nor any powers, neither height nor depth, nor anything else in all creation, will be able to separate us from the love of God that is in Christ Jesus our Lord. (Romans 8:38-39; NIV)