The Origin of 'Please' and 'Thank You'


Oddly enough, the following excerpt about language is from David Graiber's book, Debt: The First 5,000 Years.

Consider the custom, in American society, of constantly saying “please” and “thank you.” To do so is often treated as basic morality: we are constantly chiding children for forgetting to do it, just as the moral guardians of our society — teachers and ministers, for instance — do to everybody else. We often assume that the habit is universal, but ... it is not. Like so many of our everyday courtesies, it is a kind of democratization of what was once a habit of feudal deference: the insistence on treating absolutely everyone the way that one used only to have to treat a lord or similar hierarchical superior. 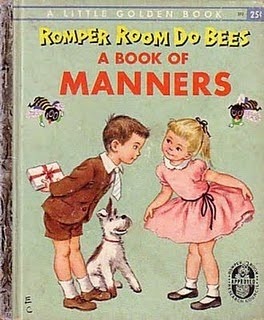 Perhaps this is not so in every case. Imagine we are on a crowded bus, looking for a seat. A fellow passenger moves her bag aside to clear one; we smile, or nod, or make some other little gesture of acknowledgment. Or perhaps we actually say “Thank you.” Such a gesture is simply a recognition of common humanity, we are acknowledging that the woman who had been blocking the seat is not a mere physical obstacle but a human being, and that we feel genuine gratitude toward someone we will likely never see again. None of this is generally true when one asks someone across the table to “please pass the salt,” or when the postman thanks you for signing for a delivery. We think of these simultaneously as meaningless formalities and as the very moral basis of society. Their apparent unimportance can be measured by the fact that almost no one would refuse, on principle, to say “please” or “thank you” in just about any situation — even those who might find it almost impossible to say “I'm sorry” or “I apologize.”

In fact, the English “please” is short for “if you please,” “if it pleases you to do this” — it is the same in most European languages (French s'il vous plait, Spanish por favor). Its literal meaning is “you are under no obligation to do this.” “Hand me the salt. Not that I am saying that you have to!” This is not true; there is a social obligation, and it would be almost impossible not to comply. But etiquette largely consists of the exchange of polite fictions (to use less polite language, lies). When you ask someone to pass the salt, you are also giving them an order; by attaching the word “please,” you are saying that it is not an order. But, in fact, it is.

In English, “thank you” derives from “think”. It originally meant, “I will remember what you did for me” — which is usually not true either — but in other languages (the Portuguese obrigado is a good example) the standard term follows the form of the English “much obliged” — it actually does mean “I am in your debt.” The French merci is even more graphic: it derives from “mercy,” as in begging for mercy; by saying it you are symbolically placing yourself in your benefactor's power — since a debtor is, after all, a criminal. Saying “you're welcome,” or “it's nothing” (French de rien, Spanish de nada) — the latter has at least the advantage of often being literally true — is a way of reassuring the one to whom one has passed the salt that you are not actually inscribing a debit in your imaginary moral account book. So is saying “my pleasure” — you are saying, “No, actually, it's a credit, not a debit — you did me a favor because in asking me to pass the salt, you gave me the opportunity to do something I found rewarding in itself!” ...


All of this is a relatively recent innovation. The habit of always saying “please” and “thank you” first began to take hold during the commercial revolution of the sixteenth and seventeenth centuries — among those very middle classes who were largely responsible for it. It is the language of bureaus, shops, and offices, and over the course of the last five hundred years it has spread across the world along with them. It is also merely one token of a much larger philosophy; a set of assumptions of what humans are and what they owe one another, that have by now become so deeply ingrained that we cannot see them.

Truth is...I must once again thank DelancyPlace.com for bringing this interesting tidbit of truth to my attention.