I've been wishing we sang more in our worship services...and now I've got some science to back me up. 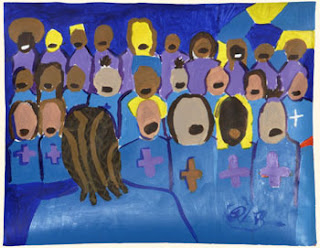 Consider this quote from Iain McGilchrist's book, The Master and His Emissary: The Divided Brain and the Making of the Western World...

That we could use non-verbal means, such as music, to communicate is, in any case, hardly surprising. The shock comes partly from the way we in the West now view music: we have lost the sense of the central position that music once occupied in communal life, and still does in most parts of the world today. Despite the fact that there is no culture anywhere in the world that does not have music, and in which people do not join together to sing or dance, we have relegated music to the sidelines of life. We might think of music as an individualistic, even solitary experience, but that is rare in the history of the world. In more traditionally structured societies, performance of music plays both an integral, and an integrative, role not only in celebration, religious festivals, and other rituals, but also in daily work and recreation; and it is above all a shared performance, not just something we listen to passively. It has a vital way of binding people together, helping them to be aware of shared humanity, shared feelings and experiences, and actively drawing them together. In our world, competition and specialisation have made music something compartmentalised, somewhere away from life's core. So Oliver Sacks writes: “This primal role of music is to some extent lost today, when we have a special class of composers and performers, and the rest of us are often reduced to passive listening. One has to go to a concert, or a church, or a music festival, to recapture the collective excitement and bonding of music. In such a situation, there seems to be an actual binding of nervous systems.”

Because of Western society's bent toward "leaving it up to the professionals," large groups of people singing together pretty much only happens at the beginning of sporting events, as part of high school and college choirs, or in worship services. And in all those instances, Sacks' words about "collective excitement" and "binding of nervous systems" are lived out.

Truth is...there is a need for both individual intellectual stimulation and emotional community-building, but there seems to me to be room to take better advantage of the unifying power of music.