Jesus as the Prodigal Son

I'm almost finished reading Henri J. M. Nouwen's book The Return of the Prodigal Son, which is an extended meditation on Rembrandt's painting by that name and the parable that it's based on. 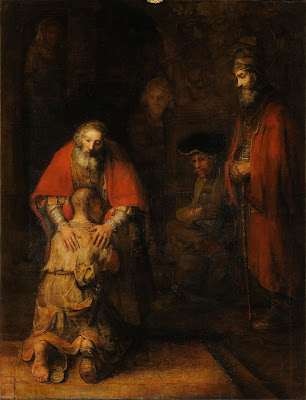 For the following quote to make more sense, it might be good to remind yourself that the original meaning of prodigal wasn't "wandering wastrel," but more along the lines of "extravagantly generous."

I am touching here the mystery that Jesus himself became the prodigal son for our sake. He left the house of his heavenly Father, came to a foreign country, gave away all that he had, and returned through his cross to his Father's home. All of this he did, not as a rebellious son, but as the obedient son, sent out to bring home all the lost children of God. Jesus, who told the story to those who criticized him for associating with sinners, himself lived the long and painful journey that he describes.

When I began to reflect on the parable and Rembrandt's portrayal of it, I never thought of the exhausted young man with the face of a newborn baby as Jesus. But now, after so many hours of intimate contemplation, I feel blessed by this vision. Isn't the broken young man kneeling before his father the "lamb of God that takes away the sin of the world"? Isn't he the innocent one who became sin for us? Isn't he the one who didn't "cling to his equality with God," but "became as human beings are"? Isn't he the sinless Son of God who cried out on the cross: "My God, my God, why have you forsaken me?" Jesus is the prodigal son of the prodigal Father who gave away everything the Father had entrusted to him so that I could become like him and return with him to his Father's home.

Truth is..."See what great love the Father has lavished on us, that we should be called children of God! And that is what we are!" (1 John 3:1)