The Disproportional Legend of the Pony Express

Think about all you've ever heard, seen, or read about the Pony Express.

Between movies, television, and books, we've been entertained by stories of those 400 horses, 180 riders, and 1900 miles of the Immigrant Trail our whole lives. 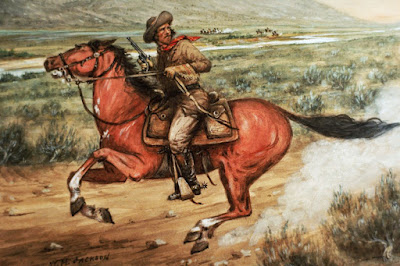 Now think about this. The Pony Express closed its operations just two days after the first cross-continental telegraph message: an assurance of support from the chief justice of California to President Lincoln.

The Pony Express casts a pretty long shadow for a business venture that only lasted nineteen months.

But still, those legends and tall tales are practically nothing when compared to the real-life impact made by a rag-tag group of fishermen, civil servants, and would-be political activists led by a backwater carpenter-turned-rabbi.

Truth is... The Kingdom of Heaven is like a mustard seed planted in a field. It is the smallest of all seeds, but it becomes the largest of garden plants; it grows into a tree, and birds come and make nests in its branches.(Matthew 13:31-32 NLT)