White Majority In The Rearview Mirror

I've got bad news for those wanting to hang on to the myth of white superiority and primacy. From Brown Is the New White by Steve Phillips: 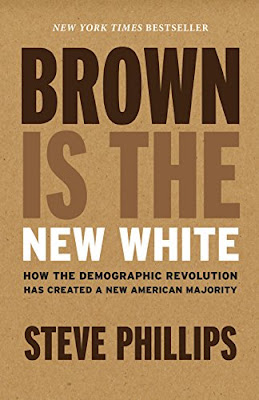 "The country's demographic revolution over the past fifty years has given birth to a New American Majority. Progressive people of color now comprise 23 percent of all the eligible voters in America, and progressive whites account for 28 percent of all eligible voters. Together, these constituencies make up 51 percent of the country's citizen voting-age population, and that majority is getting bigger every single day. ...

"The New American Majority is growing larger every single day (every minute, actually). Each day, the size of the U.S. population increases by more than 8,000 people, and nearly 90 percent of that growth consists of people of color. To understand this startling reality, one must look at the rate of births and deaths, and the rise in immigration.

"In terms of births, as of 2011, the majority of babies born in America (50.4 percent) are now people of color. A baby is born every seven seconds, resulting in 12,343 births per day. At the other end of the age spectrum, the racial composition of the over-65 segment of the popula­tion is quite different. Because of centuries of racially exclusionary im­migration policies, the total U.S. population was nearly 90 percent white as recently as 1950. As a result, the current over-65 population is 78 percent white. Using that figure to estimate the ra­cial breakdown of the country's deaths -- which occur at a rate of 6,646 per day (once every thirteen seconds) -- it's clear that while a majority of births are people of color, deaths are overwhelmingly white.

"What this means for net population growth, then, is that the white birth number of 6,048 new babies each day (49 percent of the babies born every day) are largely canceled out by the 5,204 white deaths ev­ery day. For people of color, the 6,295 daily births (51 percent of all births) are only reduced by 1,442 deaths, leaving a net increase of 4,853 people of color every day.

Truth is...It's way past time for "red and yellow, black and white, they are precious in His sight" to make it into the hearts of adults and not just Sunday School children.