It Doesn't HAVE To Be Science Or Faith

I recently started reading a book by a couple of Jesuit priests who work at the Vatican observatory (Guy Consolmagno and Paul Mueller). It's titled Would You Baptize an Extraterrestrial? and its first chapter gives a great analogy that explains how science and religion don't have to be at odds with each other.

One piece of background explanation: the painting that is referenced in this quote was not painted with brushstrokes of paint, but was created using a technique called pointillism, where the image was built up by adding colors dot by dot, much like the digital imaging techniques used today. 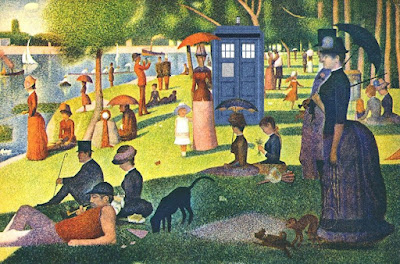 When I look at A Sunday on La Grande Jatte  -  1884, I keep flipping back and forth between seeing the whole scene, which is lots of people enjoying a beautiful day in the park, and seeing the little dots from which that scene is made up. But to me that doesn't mean the world is falling apart  -  it means that there is more than one way to see the world. One way is to see the big picture, the everyday world of common experience. Another way is to see the world as analyzed by science: a world of tiny atoms, of particles and waves, of fields of force  -  a world that can be described mathematically.

When you see the world through the eyes of faith, you are often very much concerned with everyday experiences of what is right and good and beautiful. You are concerned with how your life hangs together and makes sense  -  or doesn't!

So you can see this painting as a collection of dots, or you can see it as an image of people in a park. Both descriptions are true. If one of them is true, it doesn't make the other one false.

Truth is...and I think I may have said this before...when presented with an either/or choice, sometimes the best option is both/and.