Clowning Around With the Gospel

Godspell holds a unique place in the history of musical theater. I mean, there aren't a whole lot of Broadway musicals birthed as someone's master's thesis that feature a group of childlike clowns acting out Biblical parables to a pop music score...while being led by Jesus in a Superman shirt. 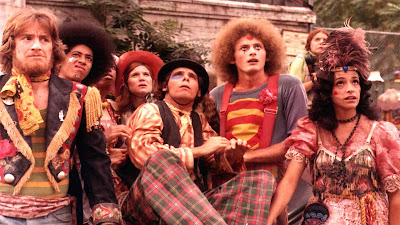 At the time Godspell was gaining popularity, it also collected a few distractors who thought the play was belittling the teachings of Jesus. Ironically, the intent was the exact opposite.

Consider the following account of how John-Michael Tebelak came to write the show, taken from Carol de Giere's book The Godspell Experience: Inside a Transformative Musical.

While searching for material for his thesis project, Tebelak read through several miracle plays and passion plays, but felt them to be "very heavy." Then, one afternoon, he read the four Gospels of the New Testament in one sitting. "Afterward, I became pretty excited because I found what I wanted to portray on stage...Joy!"
Tebelak resolved to attend a church service, and it was there that a spiritual experience, or rather lack thereof, completed the inspiration for the new musical. On a snowy Easter morning in 1970, Tebelak arrived at the Anglican Cathedral in Pittsburgh wearing his standard overalls and scraggly Afro haircut. The people sitting near him were complaining about the snowfall upsetting their plans.
He explained later to Dramatics Magazine, "An old priest came out and mumbled into a microphone, and people mumbled things back, and then everyone got up and left. Instead of 'healing' the burden, or resurrecting the Christ, it seems those people had pushed Him back into the tomb. They had refused to let Him come out that day."
As Tebelak left the service, a policeman who had been sitting a few pews in front of him wanted to frisk him for drugs. "Apparently he had thought I was ducking into the church to escape the snowstorm. At that moment  -  I think because of the absurd situation  -  it angered me so much that I went home and realized what I wanted to do with the Gospels: I wanted to make it the simple, joyful message that I felt the first time I read them and re-create the sense of community, which I did not share when I went to that service."
For Tebelak, associating Biblical material with clowns didn't mean he was making fun of religion. Rather, he wanted his project to be an antidote to lifeless and boring spiritual experiences; clownlike performances were a means to an end.

Truth is...Father God, while I am glad that Godspell exists, I pray that the way I live my life, express my faith, and worship with my church family will never come close to mimicking the joyless experience that motivated its creation.