The Resurrection of Jesus

On the third day, [Jesus] rose again in accordance with the Scriptures 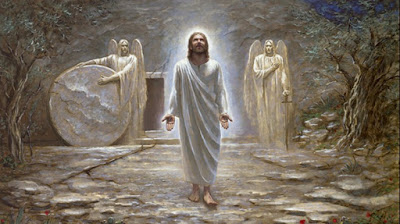 But very early on Sunday morning the women went to the tomb, taking the spices they had prepared. They found that the stone had been rolled away from the entrance. So they went in, but they didn’t find the body of the Lord Jesus. As they stood there puzzled, two men suddenly appeared to them, clothed in dazzling robes.

The women were terrified and bowed with their faces to the ground. Then the men asked, “Why are you looking among the dead for someone who is alive? He isn’t here! He is risen from the dead! Remember what he told you back in Galilee, that the Son of Man must be betrayed into the hands of sinful men and be crucified, and that he would rise again on the third day.”

Then they remembered that he had said this. So they rushed back from the tomb to tell his eleven disciples—and everyone else—what had happened. It was Mary Magdalene, Joanna, Mary the mother of James, and several other women who told the apostles what had happened. But the story sounded like nonsense to the men, so they didn’t believe it. However, Peter jumped up and ran to the tomb to look. Stooping, he peered in and saw the empty linen wrappings; then he went home again, wondering what had happened.

One day some teachers of religious law and Pharisees came to Jesus and said, “Teacher, we want you to show us a miraculous sign to prove your authority.”

Truth is...there would be no Christianity without the resurrection. Make no mistake, the first Christians did not make up the story of a resurrection in order to validate their "cause". The resurrection of Jesus turned them into Christians. Otherwise, they would have been just one more group of disappointed fans.