Have You Been Doing It?


It's one of the easiest things in the world to do. Almost all of us find ourselves doing it without even thinking about it.

And we need to stop it.

The "it" under consideration here is comparing ourselves to others.

Whether we're considering our job performance, swimming abilities, or usefulness to God, we always seem to be glancing around ourselves to see how well we're doing compared to those around us.

The problem with doing that, no matter how naturally we fall into it, is that we end up in one of two unhelpful situations. Either we start thinking too highly of ourselves or we start putting ourselves down.

Take the opening lines of the Rich Mullins song, "Hard", for example:

Well, I do get a little much over-impressed
'Til I think of Peter and Paul and the apostles
I don't stack up too well against them I guess
But by the standards 'round here I ain't doing that awful

More often than not, I see folks leaning toward the extreme of thinking their gifts, their abilities, and their skills aren't good enough to be of any use for the Kingdom...that there are way more people who can do way more impressive things and get way bigger results. 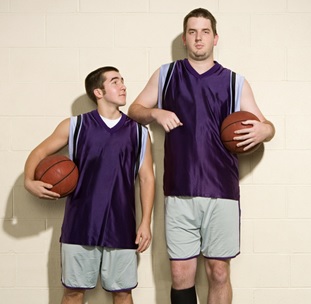 The sad part of that kind of thinking is that it usually results in the person not doing anything with their gifts, abilities, and skills. It gets left up to "all those other people who are more talented."

Paul had something to say about this in First Corinthians 12:12-21.


The human body has many parts, but the many parts make up one whole body. So it is with the body of Christ....

Truth is...We ought not to be weary of doing little things for the love of God, who regards not the greatness of the work, but the love with which it is performed. (Brother Lawrence)
Posted by Dewey at 6:07 AM