The reputation of 17th-century monk, Brother Lawrence, is that he was a very religious kind of guy, but while reading The Practice of the Presence of God, I'm finding that to not be the case.

I'm not saying he wasn't spiritually aware or that he didn't love God. I am saying that he didn't seem to care too much about outward forms and rituals that most folks would call religious.

Allow me to quote (and then translate):


I have quitted all forms of devotions and set prayers but those to which my state obliges me. And I make it my business only to persevere in His holy presence, wherein I keep myself by a simple attention and a general fond regard to God, which I may call an actual presence of God; or, to speak better, an habitual, silent, and secret conversation of the soul with God, which often causes in me joys and raptures inwardly, and sometimes also outwardly, so great that I am forced to use means to moderate them and prevent their appearance to others.

In other words, Larry didn't bother with having "a quiet time" or a set-apart schedule for "personal devotions" beyond what was required of him by the fact that he lived in a monastery. Instead, he purposefully thought of God as his constant companion; silently talking with Him as he went about his daily duties. And it seems that consistent awareness of God's presence sometimes brought Larry such joy that it took some effort to keep from looking like a giddy fool to the brothers around him. 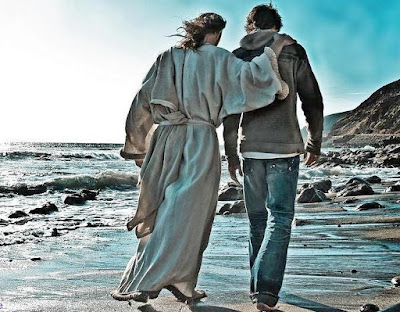 Truth is...I'm not necessarily recommending that we all discard any devotional habits we may have cultivated. Instead, methinks it would be a great advantage to add to them the awareness that we are with the Lord whether we're kneeling in prayer or weeding a garden or commuting to work.
Posted by Dewey at 6:07 AM