A. J. Jacobs has made a name for himself by writing about his social experiments wherein he subjects himself to a set of rules (like, for instance, living up to the Old Testament law, which he wrote about in The Year of Living Biblically). 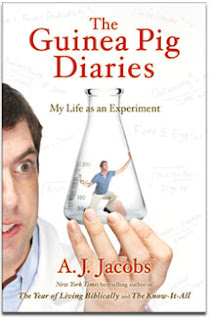 In The Guinea Pig Diaries, he set out to spend a month doing everything his wife said...to be The Perfect Husband. In one short passage, he comes up with a pretty good word picture for what a good marriage should be like:

This is something I notice throughout the day. Whenever Julie says something, my default setting is to argue with her. It's (usually) not overtly hostile bickering. It's just affectionate parrying. Verbal jujitsu.

I also know it's not good. You playfully bicker enough, and after a few years, it stops being playful.

I've got to reboot my brain. Marriage doesn't have to be boxing. Maybe it can be two people with badminton rackets trying to keep the birdie in the air.


Truth is...a guy (like A. J.) doesn't have to be a marriage counselor to give some good counsel about marriage.