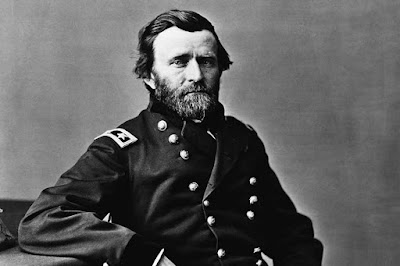 "That winter James Rusling, a colonel in the quartermaster's department, caught his first look at the hero of Chattanooga [Grant] and was disappointed. Here was no shiny general with brass buttons, sash and sword, but a rather common-looking man, just like 'a country storekeeper or a western farmer.' The general was 'evidently intent on everything but show.' But when it came to giving orders, Grant came alive, his 'clear and penetrating eye' and set jaw suggesting that he could 'dare great things, and hold on mightily, and toil terribly' in pursuit of his objective. He might be a man of few words, but 'he knew exactly what he wanted, and why and when he wanted it.' Nearly every night the general could be found using the telegraph to keep tabs on his command (and the enemy), as he pondered the next move.

"Once, the colonel approached Grant with a requisition order authorizing large expenditures. Briefly reviewing the report, the general gave his approval, catching the colonel by surprise. Might the general want to ponder the matter a little longer? Was he sure he was right? Grant looked up. 'No, I am not,' he responded; 'but in war, anything is better than indecision. We must decide. If I am wrong, we shall soon find it out and can do the other thing. But not to decide wastes both time and money, and may ruin everything.'"

Truth is...There really are only three options: Lead, Follow, or Get Out of the Way.