Are We Spinning Our Wheels?

You've heard the phrase "spinning our wheels," right? It refers to having a vehicle sitting in mud or snow or on a patch of ice and being able to supply power to the drivetrain and turn the wheels, but with no traction, not being able to move the vehicle forward. 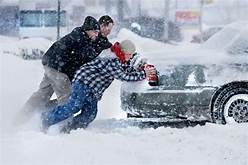 According to the following quote from The Body by Bill Bryson, something similar can happen in the practice of medicine:

We have reached the decidedly bizarre point in health care in which pharmaceutical companies are producing drugs that do exactly what they are designed to do but without necessarily doing any good. A case in point is the drug atenolol, a beta-blocker designed to lower blood pressure, which has been widely prescribed since 1976. A study in 2004, involving a total of twenty-four thousand patients, found that atenolol did indeed reduce blood pressure but did not reduce heart attacks or fatalities compared with giving no treatment at all. People on atenolol expired at the same rate as everyone else, but as one observer put it "they just had better blood-pressure numbers when they died."

It makes me wonder if sometimes the church might be guilty of the same thing. A group of people who all believe basically the same things about Jesus meet together and pray and study the Bible and sing. They have a sign out front and parking out back and pay their bills consistently. They "do church" just fine, but seem to have no effect on the neighborhood they're in other than making the restaurants busy for Sunday lunch.

Truth is...I sometimes wonder if the same can be said about me.