We believe in the Holy Spirit, the Lord 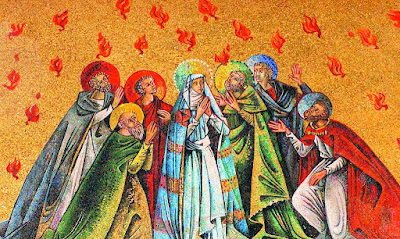 The earth was formless and empty, and darkness covered the deep waters. And the Spirit of God was hovering over the surface of the waters.

After his baptism, as Jesus came up out of the water, the heavens were opened and he saw the Spirit of God descending like a dove and settling on him.

On the day of Pentecost, all the believers were meeting together in one place. Suddenly, there was a sound from heaven like the roaring of a mighty windstorm, and it filled the house where they were sitting. Then, what looked like flames or tongues of fire appeared and settled on each of them. And everyone present was filled with the Holy Spirit and began speaking in other languages, as the Holy Spirit gave them this ability.

Truth is...There is much more to be said about the Holy Spirit, and it will be said in the next several phrases in the creed. For now, let's just begin one step ahead of some believers in Ephesus that Paul encountered in Acts 19:

While Apollos was in Corinth, Paul traveled through the interior regions until he reached Ephesus, on the coast, where he found several believers. “Did you receive the Holy Spirit when you believed?” he asked them.

“No,” they replied, “we haven’t even heard that there is a Holy Spirit.”