Through him [Jesus] all things were made 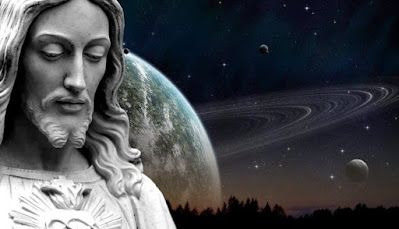 He came into the very world he created, but the world didn’t recognize him.

Through him God created everything in the heavenly realms and on earth.

If you've been paying attention, you might be saying, "Hey, wait a minute! The second phrase in this creed says that God, the Father Almighty, is 'maker of heaven and earth,' so what's the deal all of a sudden saying that the SON was the creative agent?"

Pay attention to the two Scripture references above. God the Father did the creating, but he did it through the Son.

It might help to take the opening of John's gospel literally for a moment when it equates Jesus with "the Word" and then reread the first chapter of Genesis where God speaks  -  pronounces a word  -  and things come into being.

Truth is...It's as if God the Father sits enthroned eternally and any personal interaction, like touching or creating, is accomplished by God the Son.