[And with this, we come to the end of 2nd Chapter of Acts' first album, With Footnotes.]

Peter made his appeal to them and with many other words he urged them, saying, "Save yourselves from the punishment coming to this wicked people!" Many of them believed his message and were baptized; about three thousand people were added to the group that day. They spent their time in learning from the apostles, taking part in the fellowship, and sharing in the fellowship meals and the prayers.

Many miracles and wonders were done through the apostles, and this caused everyone to be filled with awe. All the believers continued together in close fellowship and shared their belongings with one another. They would sell their property and possessions and distribute the money among all, according to what each one needed. Every day they continued to meet as a group in the temple, and they had their meals together in their homes, eating the food with glad and humble hearts, praising God, and enjoying the food will of all the people. And every day the Lord added to their group those who were being saved. 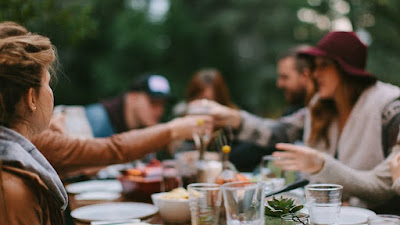 I wake up in the mornin' and start cryin'
All the folks around me are dying
Oh, they never heard
About Jesus, the Living Word
Why can't they hear the Good News?

Well because they're too busy watchin' T.V.
Never takin' time to read in the real book of life
All they know is war and killin'
Yet their spirit's dead ain't filled
They haven't received the Light
They're just walkin' in the night

Why can't they hear the Good News?

Truth is...While most of what happens in this blog assumes a certain level of belief and faith amongst the readers, I also admit to a hope for those who don't believe and aren't people of faith to come along for the ride with hearts willing to be transformed by Christ.